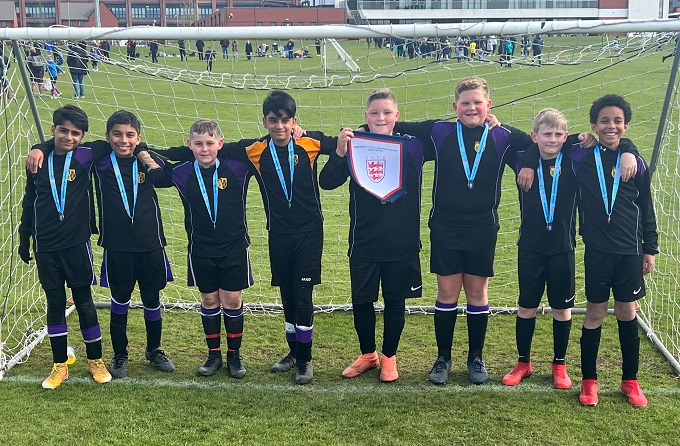 Excitement and pride is running high at Braywick Court School this Easter as the schools’ years five and six football team has reached the ESFA U11 ‘Small Schools’ National Finals which will be held the home of premier league team Coventry City FC on Friday 6th May 2022.

Braywick will be representing the South West Region after having won the Maidenhead heats, the Berkshire finals and then runners up in regional finals on Saturday 2nd April held in Keynsham, Bristol.

The finals, to be held at The Coventry Building Society Arena, on Friday 6th May 2022, where Braywick will be one of only eight teams in England with the chance to become the 2022 England National ‘Small Schools’ Champions! The Small Schools competition is for schools with less than 65 pupils on roll across Years 5 and 6.

Team Coach, and school P.E. Lead, Dan Bavington said “I am so proud of our squad, they have worked so hard in training and as a team in each round of the competition. I have seen their skills, determination and self-belief grow in each round. They have embraced the experience so far and they fully deserve their place in the national finals.”

Headteacher, Gemma Donnelly, added “this is a once in a life-time experience for the players, their families, the staff involved and the whole Braywick Court Community.  Literally hundreds of schools started this competition so for us to be in the final eight teams is just a fantastic achievement, opportunity and honour.  Whatever the result, no-one can take away how proud we are of the boys!”

The English Schools’ Football Association was founded in 1904 and is the governing body of schools’ football in England. It is responsible for the running and development of schools’ competitions and festivals at primary and secondary school age. The ESFA headquarters is in Stafford.

The ESFA’s National Competition programme attracts around 16,000 team entries each season with teams entering year on year as a result of the exceptional provision of competitions offered. The ESFA carefully ensures that the competition offer meets the needs of the schools which enter and the Coventry Building Society Arena, CV6 6AQteams returning, but encourages new schools and teams to take part in and experience our National Cup programme, season after season.

National Competitions are at the very heart of what the ESFA has to offer, in creating thousands of opportunities for children to play grassroots football at a National level. Each season culminates with a period of National Finals, in which finalists travel to various prestigious football stadia across England to compete to be crowned champion of England in their respective competitions.

The small schools’ final will see eight teams, the winners and runners-up from the five English regions, battle for the cup and title.

The competition was established in 1979 and regularly attracts over 3,000 boys’ teams and 2,000 girls’ teams on an annual basis, making it one of the largest schools’ football competitions in the world.

The tournament pathway is organised through, District, County and Regional competitions, which culminate in a national final which will be hosted at the home of Coventry City, at The Coventry Building Society Arena, CV6 6AQ on Friday 6th May 2022.

Manage Cookie Consent
To provide the best experiences, we use technologies like cookies to store and/or access device information. Consenting to these technologies will allow us to process data such as browsing behaviour or unique IDs on this site. Not consenting or withdrawing consent, may adversely affect certain features and functions.
Manage options Manage services Manage vendors Read more about these purposes
View preferences
{title} {title} {title}